The Academy:  The Norman Jordan African American Arts & Heritage Academy is a week long summer arts experience that offers teenagers between the ages of 13-18 concentrated study in the artistic discipline of their choice.  Students are able to choose from one of the following artistic genres:  vocal music, instrumental music (strings, horns, & percussion including steel drums), theater, visual arts, creative writing (including hip-hop and basic song writing), dance, and arts technology.  In addition, students are enlightened by exposure to the historical, social, and cultural heritage associated with their chosen art forms via workshops, guest artists, and field trips. This approach creates a holistic balance to their study.

Our previous summer arts academies have been held at various venues in West Virginia such as Camp Washington Carver, Harpers Ferry, Martinsburg, and most recently West Virginia University in Morgantown, West Virginia. Our Guest Artists have been representatives of every artistic genre, and field trips have included the Great blacks in Wax Museum, the Smithsonian Museum, Wolf Trap Theater performance, Ellie Mannette Steel Drum work shop, and many other artistic and cultural institutions.  This year’s summer Arts Academy will take place the week of July 5-11, 2020 at West Virginia State University in Institute, West Virginia.

The Organization:  The Norman Jordan African American Arts & Heritage Academy (initially known simply as African American Arts & Heritage Academy) was established in the 1980s.  It consists of a statewide group of artists and educators, whose mission is to aid the artistic and cultural development of youth by helping to identify and cultivate their artistic talents and interests.  The organization has a long history of partnering with various agencies, institutions, and community organizations to constructively enhance the lives of teenagers by operating an African American Arts & Heritage Academy each summer.  Throughout its existence, all of the academy’s workshop instructors have been committed professional artists with many years of experience as artisans and teachers. Eventually Norman Jordan emerged as the primary motivator for sustaining the organization, and to honor his diligent service and dedication, his name was added to the organization’s title after he passed away in 2015.

Norman Jordan of Ansted, WV served as president and chief financial officer until his passing in 2015. Jordan also was one of the leading African-American poets of West Virginia and the black arts movement.

Born in Ansted (Fayette County) WV, Jordan’s family moved to Cleveland, Ohio, where he attended Cleveland public schools and served four years in the US Navy.

Jordan returned to Ansted in 1977 and enrolled at West Virginia University where he received a Bachelor of Fine Arts degree in Theatre and two years later, Jordan earned a Master of Arts in African American Studies at Ohio State University. A published poet and playwright, his poetry has been anthologized in 38 books of poetry, the most recent being Make A Joyful Sound: Poems for Children by African American Poets, In Search of Color Everywhere: A Collection of African American Poetry and Wild Sweet Notes: Fifty Years of WV Poetry 1950-1999.

The Director of the WV African American Arts and Heritage Academy and the African American Heritage Family Tree Museum, his plays have been staged in San Diego, Cleveland, Texas, Atlanta and New York.  He was a recipient of a United Nations Playwrights Award and the first recipient of the Harriet Eells Performing Arts Fellowship at the famous Karamu House Theatre in Cleveland, Ohio.

A few other things you may or may not know about him: Jordan is one of the most-published Appalachian poets — Jordan is featured in the West Virginia Literary Map. For years Jordan directed the youth camp at Camp Washington-Carver for the WV Department of Culture and History. As a poet and actor Jordan used the pseudonym “Peter Jesus” for a few years.  For several years Jordan portrayed the historical character Dr. Carter G. Woodson.  He also taught literature at WVU and Glenville State college.  He was inducted into a poet’s collective called the Affrilachian Poets on Thursday, Sept. 4, 2008, at the Carnegie Center, 251 W. Second St., Lexington, Ky.  A person of many talents and achievements, Norman Jordan was also known for his gentle demeanor and good sense of humor.

Norman Jordan had rheumatic fever when he was about 9 or 10. His sickness was to become a mixed blessing: an attack on his physical resilience but a powerful gift to his spirit.

The Ansted native began writing poems more than 60 years ago as he recovered from that serious illness during the segregation era.

“They called our school ‘the colored school,’” he said. “It was on a hill, and rheumatic fever affected your heart. … It prevented you from doing physical stuff, so I couldn’t walk up this hill to the school. I was in Charleston General Hospital for a couple of weeks. When I came home, they gave me an inbound teacher.”

That teacher was from Mount Hope and her name was “Mrs. Charles.” And she loved poetry.

“We would read poems together, and then she started giving me assignments to memorize poems or a couple stanzas from a poem. Eventually, she had me write some poetry, and that’s where I started writing poetry,” Jordan explained.

And he never stopped.

Now, at age 73, Jordan is West Virginia’s most widely published African-American poet, along with being an editor and collaborator. He is a repository of history and the oral poetry tradition, a storyteller, but still extemporizes on the world of the now. 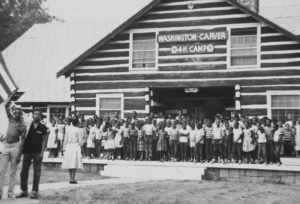 Camp Washington-Carver in Fayette County opened in 1942 as a 4-H camp for African Americans — the first of its kind in the nation. Unless otherwise noted, all photographs are from the Eastern Coal and Fuel Collection, courtesy of the West Virginia State Archives, photographers and dates unknown.
In a December 1936 letter to members of the State Board of Control, Dr. Davis explained the need for a 4-H camp with a swimming pool. “At present time,” he stated, “there is but one organized and directed swimming pool in the state of West Virginia into which Negroes may go freely without molestation or arrest.

At that time, 4-H clubs, which had evolved out of “corn and hog raising projects,” were extremely popular in rural America. Club participants were involved with many different programs that emphasized education and personal grooming. Standard projects were nutrition and meal planning, bread making, farming, raising chickens and hogs, and flowers. African American citizens were forced to swim in snake-infested creeks and dangerous rivers while white Americans were given swimming lessons in pools patrolled by lifeguards. This had long been a sore issue in the black community.

After almost a decade of struggle, African American leaders in West Virginia had something to be proud of when a bill was introduced to the regular session of the 43rd Legislature of West Virginia by Fleming Adolphus Jones, a black member of the House of Delegates from McDowell County. It read, “For the purpose of teaching Negro boys and girls the 4-H standards of living, and to inspire them to lift themselves toward these standards, and to discover and train Negro boys and girls for leadership, and for the purpose of teaching standards of excellence in agriculture, soil conservation, vocational agriculture, and home economics, a 4-H camp, institute, and state exhibit for Negroes is hereby established.”

The bill passed: 70 yeas, 11 nays, and 13 absent or not voting. It was signed into law on March 9, 1937, by Governor Homer Adams Holt. Along with the passing of House Bill No. 48 authorizing the establishment of the camp, the legislature also approved the request by West Virginia State College (WVSC) to conduct extension work. WVSC had for many years pointed out that by being a land grant college they: were entitled to that status by the U.S. Department of Agricultural.

Besides the 4-H camps, a range of other activities took place at the camp including Boy’s and Girl’s State, Boy Scouts and Girl Scouts, mining encampments, home economics encampments, church camps, private camps, and other community camps. The buildings also served as a space for large meetings and gatherings for many groups and organizations from around the state. WVSC conducted staff and faculty training seminars and special classes on the site. They also held pre-season band and football conditioning sessions, military training for pilots, and ROTC maneuvers. Lectures and demonstrations by the telephone company, hospitals, mining companies, and other state and federal organizations would accompany those programs.

In essence, the 4-H facility served as a junior college for the state’s African American population. And because of prevailing Jim Crow laws, the swimming pool, baseball field, Chestnut Lodge, and the camp grounds were well-used for church picnics, reunions, and other civic activities. An older former camper was quoted as saying, “For black people, the magnificent main lodge was like the Statue of Liberty for it represented the entrance to a free land. You could eat in the dining room and swim in the swimming pool. Jim Crow laws stopped at the gates, …and that made it almost a holy place.”

The most colorful event was the 2nd Annual John Henry Memorial Festival, featuring a Blues and Gospel Jubilee starring Tai Mahal, Uncle Homer Walker, Della Taylor, Eugene Redmond, Bob Thompson, Miss Naomi Jordan and the Family Affair, Lou Myers, and others. There were Sunday school encampments, Boy Scouts, Girl Scouts, and other integrated groups, but the efforts failed because those organizations did not have significant capital to support the complex’s operating budget. In 1979, the camp was transferred to the Department of Culture and History to become a new rural cultural arts center. By this time it was known officially as Camp Washington-Carver in honor of historic black leaders Booker T. Washington and George Washington Carver.

In 1980, Camp Washington Carver (CWC) was placed on the National Register of Historic Places. The occasion was celebrated with a re-dedication ceremony by the Department of Culture and History, with Governor Jay Rockefeller giving the keynote address [See Goldenseal, “Camp Washington-Carver Opens,” October December 1980].

In the spring of 1984, Norman Jordan received a letter from Commissioner of the Department of Culture and History, Norman Fagan, asking him to contact Bob Shreve at CWC if he was interested in working there. A seasonal position in the programming department at the camp was available. Jordan accepted the job on the spot.

In 1986, Jordan proposed that instead of just presenting a week of performing arts for the Black Heritage Week Celebration, that CWC offer a youth arts camp. The feeling was that the camp would be instrumental in keeping alive the roots of the 4-H concept that resulted in the creation of the historic site. For the first encampment, preparations were made for 80 participants but were happily surprised when 120 teenagers showed up and registered for the arts workshops. The young people were divided into groups of 25 and each group was rotated to workshop sessions in literature, theatre, music, dance, and photography. The success of the first encampment instantly established this as an annual event.